Also recognized during the event was Megan Rogers, a sophomore business major at Niagara who was just notified that she has been named a 2016 Newman Civic Fellow by Campus Compact for demonstrating outstanding leadership and civic engagement.

More than 230 people attended the awards banquet, which was emceed by WGRZ-TV anchor and 1986 NU alumna Maryalice Demler.

Acosta Sales and Marketing received the Corporate Leadership Award for its profound success and commitment to the community and Niagara University. Founded in 1927 as the L.T. Acosta Company, Acosta has grown into one of the leading outsourced sales and marketing agencies that serves consumer packaged goods companies and retailers across much of North America. Headquartered in Jacksonville, Acosta employs more than 37,000 associates. Acosta has designated three corporate charities: the Muscular Dystrophy Association, the Shop to End Hunger program sponsored by Feeding America, and the Wounded Warrior Project through the Believe in Heroes consumer promotion campaign. The company, especially William J. Chiodo, executive vice president, has played an integral role in the development of Niagara University’s food marketing program and its Food Marketing Center of Excellence.

The Family Business of the Year Award went to West Herr Automotive Group, which was established by Joseph Herr Jr. and his brother-in-law, Harold West, in 1950 as a used car dealership under a tent in Hamburg. From that very modest beginning, West Herr Automotive Group has become the largest dealer group in New York state and the 20th largest in the country. Under the current leadership of CEO Brad Haefner and president and majority owner Scott Bieler, West Herr has experienced phenomenal growth and success. Last year, West Herr’s 25 dealerships supplied its customers with nearly 70,000 vehicles. West Herr is a seven-time winner of the Better Business Bureau’s Torch Award for marketplace ethics and commitment to customer satisfaction. The company is committed to charitable causes throughout the community, including Roswell Park Cancer Institute, Hospice Buffalo, Child and Family Services, the Alzheimer’s Association of WNY, Meals on Wheels for WNY, the SPCA Serving Erie County, and the Buffalo Zoo.

The 2016 Distinguished Accounting Alumnus was Dominic C. Pino, ’70. Pino joined the Buffalo office of PricewaterhouseCoopers shortly after graduating from Niagara University with a B.B.A. in accounting. He was transferred to Miami in 1973 and, upon being admitted to the partnership, managed the firm’s accounting practice in Curacao, Netherlands Antilles, from his Florida office for nine years. In 1991, Pino moved to Ft. Lauderdale and began leading PwC’s financial services practice throughout Florida. Under Pino’s leadership, PwC’s practice morphed into the largest accounting firm provider of audit, tax, and advisory services in Florida. He retired in June 2008 after 38 years with PwC, and now serves as an independent consultant and instructs ethics courses for the Florida Institute of Certified Public Accountants. Pino has assisted many community-based organizations, including the Salvation Army of Ft. Lauderdale, the Leukemia Society of South Florida, and Niagara University’s College of Business Administration.

Don J. King, the 2016 Dean’s Award recipient, earned a bachelor of business administration from the University of Miami, and then joined the United States Army during the Korean War. In 1958, he was chosen as the Niagara Falls community ambassador to Poland. King has been a fixture on the north end of Niagara Falls’ business district for more than five decades, operating The Wellesley Dress Shop, a downtown staple, from 1962 through the early 2000s. Since then, King and his four daughters have directed a marketing group and art gallery dedicated to organizing and preserving the creative legacy of Don’s mother, Polly. A tireless community advocate, King is well known for his 35-year board tenure as a board member of the Niagara Falls City School District. He has also assisted Niagara University, Niagara Falls Memorial Medical Center, the United Way of Niagara, the Buffalo Niagara YMCA, and the Niagara Falls Public Library, among others. 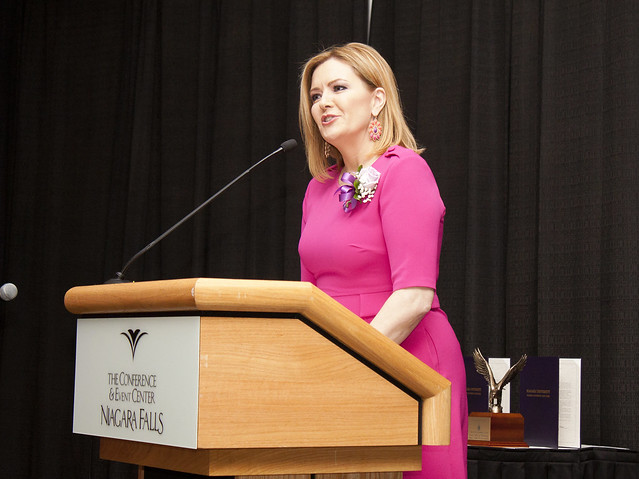